The activities of Chinese State-Owned construction Enterprises (SOE) in and around the EU have reached new dimensions with the “Belt and Road Initiative” (BRI) and the budgets involved. Recent examples of public works contracts awarded to consortia led by Chinese SOEs (e.g. in Croatia and Sweden) for prices that seem to be abnormally low from the perspective of a private company show the need for a comprehensive EU strategy in favour of a level playing field and fair competition.

To address the China Challenge, FIEC has joined forces with the European International Contractors (EIC) and the European Dredging Association (EuDA). Dealing with internal market issues, FIEC’s main objective is to prevent unfair competition and ensuring a level playing field on the internal market while our partners are also addressing external challenges.

In 2012, the European Commission adopted a proposal for a Regulation on the access of third-country goods and services to the Union’s internal market in public procurement and procedures supporting negotiations on access of Union goods and services to the public procurement markets of third countries - also known as International Procurement Instrument (IPI). The main aim consisted of increasing the EU’s leverage in negotiations in order to achieve reciprocity as regards the access of European companies to foreign procurement markets. Basically, where a third country not being member to the WTO Government Procurement Agreement (GPA) restricts market access for European companies, economic operators from the concerned country could be subject to restrictive measures taken by the European Commission.

FIEC considers the IPI as a vehicle to prevent unfair competition on the internal market and is mostly concerned by the fact that the IPI proposal as it stands now, would completely open the EU procurement market to third country bidders while undermining provisions of existing public procurement legislation. Therefore, FIEC advocates for several modifications of the proposal. Most importantly, it must be assured that the IPI comes as a complement to existing legislation and does not overrule it.

For several years, FIEC called for a solution to the problem of subsidised companies in procurement procedures. For instance, FIEC asked for a State Aid Test to be conducted when such companies want to participate in tendering procedures.

In May 2021, the European Commission presented its proposal for a Regulation on foreign subsidies under which it would have the power to look at foreign subsidies granted to companies active in the EU. The Regulation proposes the introduction of three tools, including a notification-based tool to investigate bids in public procurement which could utlimately lead to the exclusion of subsidised bidders.

Together with European International Contractors (EIC), the European Dredging Association (EuDA) and the Rail Supply Industry Association (UNIFE), FIEC launched an interactive website on the activities of third-country state-owned enterprises (SOEs) in the European public procurement market. The website can be accessed from this link. 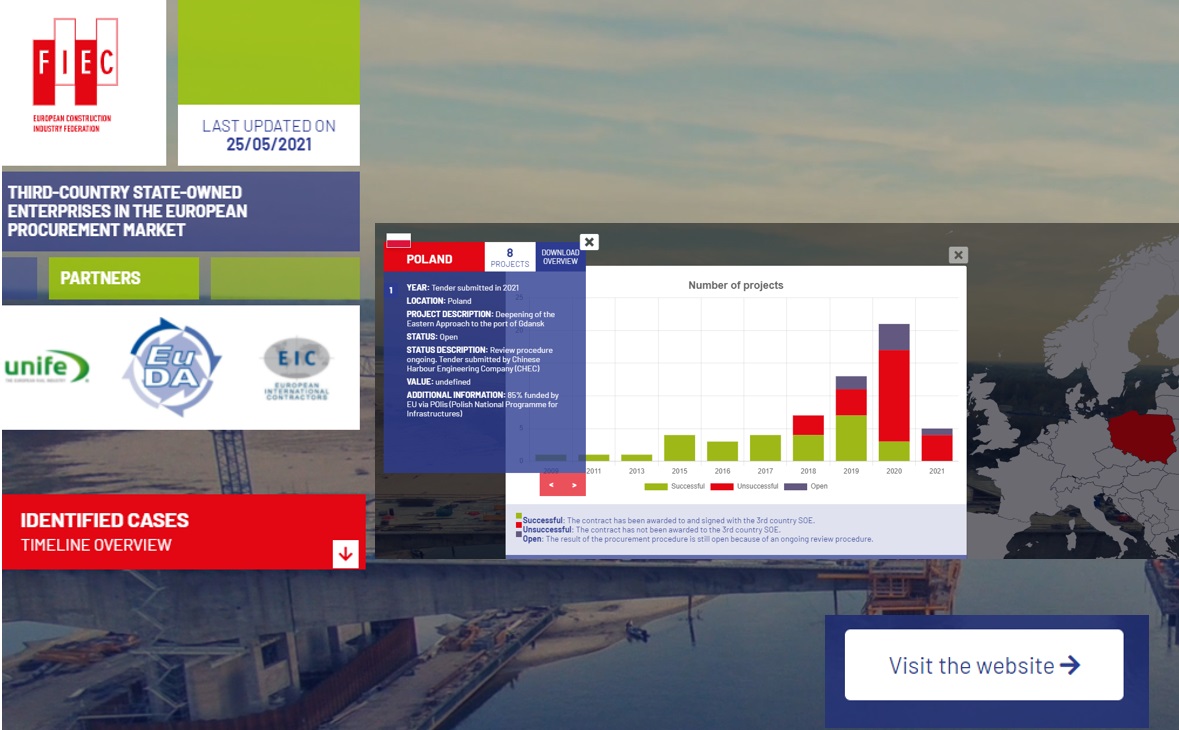 FIEC is hiring! Join our Team!